Monster or Mutation? What on earth is that?

Last year, four friends stumbled upon a hideous corpse on the beach in Montauk, Long Island. They took photos and reported it to a local newspaper. The beast’s picture soon ended up on popular blog Gawker.com and quickly spread across the Internet.

One of the first pictures shown on the news and web. You can see that it appears to have a beak.

This is another picture but it appears it doesn't have the "beak" anymore. It also has some fur...

Another angle - this shows the fur and makes the face look like it has a beak. It looks alot different from this angle than the picture above.

Some speculated it was a decaying raccoon or dog corpse. However, the body was not recovered, so it has never been officially identified.

However, another strange beast washed up on Southhold, in May! The discoverers contacted Nicky Papers, who owns Montauk-Monster.com , to come out and examine it. Despite fearing it may be a hoax, he drove out to find the corpse laying there, and quickly took photos and video.

Papers wrote that the original finders took the carcass home and are keeping it on ice for the time being, to avoid the disappearing body of the first Monster.

He said the body—about 3 feet long and 1 to 1 1/2 feet wide—was bloated and looked like it had been floating for a long time. “It really, really reminded me of what washed ashore last year,” he said.

It remains to be seen if any labs will take him up on his offer of having it tested.

Since a third has been discovered at Guerney's Inn:

The Montauk Monster has made its return to the shores of Long Island washing up at Gurney’s Inn. (Oceanside resort located in Montauk, NY) The initial discovery was made by PJ Monte and friends while walking on beach property owned by Gurney’s Inn. (July 2nd 2009 at 6:15 PM) The dead and bloated carcass washed up during an elegant oceanfront wedding. With gorgeous views of the Atlantic Ocean it’s no surprise that the Montauk Monster decided to crash the party! As for the wedding party, the carcass went undetected as PJ Monte and friends moved it to a different location and the photography session began shortly after.

Some say the animal research center spawned a beast called the ‘Montauk Monster.’ The center is located on Plum Island, off the northeast coast of Long Island in New York state.

Twice in less than a year a mysterious carcass has washed ashore in Montauk, NY — and the remains of both indescribable creatures have been called the "Montauk Monster." While some thought the original beast was a viral marketing campaign, others worry that the remains could be caused by an animal disease research center on Plum Island.

Nicky Papers who runs the website Montauk-Monster.com, which tracks the latest developments, and he hypothesizes that the Plum Island center may be behind the mystery. He writes, "If this is a genetic mishap from Plum Island, we’d like to sell the remains to an independent lab for study … It has become a race against the clock as the couple who originally found ‘Beastie’ are diligently putting more ice into the cooler to keep the carcass fresh."

Plum Island, Papers points out, is where some say Lyme disease originated. He also speculated that the beast could be evidence of biological warfare.

What do you think? Is the ‘Montauk Monster’ a real threat or simply an ugly conspiracy theory? 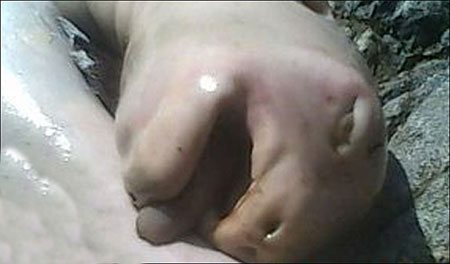 Monster: 'Gollum' was killed by the terrified children

A slimy, glob-like creature dubbed Gollum has terrified children after it slithered out of a lake and clambered over the rocks towards them in September 2009.

The young teenagers were playing by the waterfront in a Panama lake near Cerro Azul when the bald beast emerged from a cave behind a waterfall. They started screaming as it shuffled out "as if to attack them".

One said: "I have only seen that creature once before - and it was in the Tolkien film." But in a "desperate bid to defend themselves" four children grabbed rocks from the beach and hurled them at the beast. 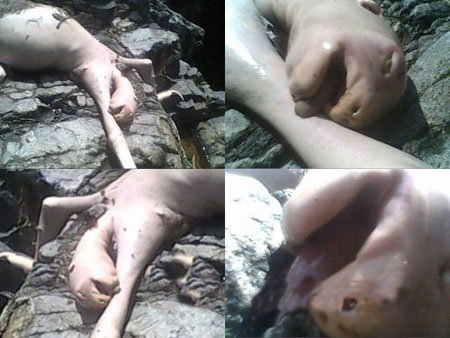 Slimey: The body was found washed up on the lake shore

Having killed it they picked up the body and tossed it back into the lake, before fleeing.

Disbelieving parents went to investigate and were amazed to see the body had washed up on the shore. It has since been picked apart by buzzards. 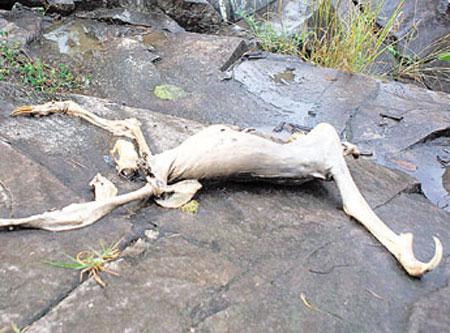 Bones: Just a days later it was picked apart by buzzards

Melquiades Ramos, an expert at the National Environmental Authority said, he will investigate the animal.

Zoologist Jacobo Arauz said it was likely the creature was likely to be a mutation and suggested it could be a form of sloth without hair. 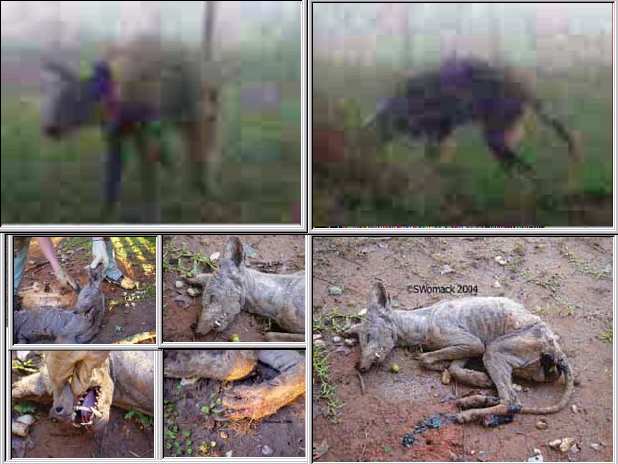 A Woman that claims to have seen a Chupacabra mauling a domestic animal has said the strange creature looked similar to a Kangaroo with huge teeth and bright red eyes.

The Chupacabra is a Cryptid (a term is used in cryptozoology to refer to a creature whose existence has been suggested but not scientifically confirmed) said to attack and drain the blood of livestock and possibly other animals, reported mainly in South America.

The first reported attacks occurred in March 1995 in Puerto Rico. In this attack, eight sheep were discovered dead, each with three puncture wounds in the chest area and completely drained of blood.

In later cases goats, chickens, turkeys and other animals have been attacked.

The wounds may be similar in appearance to bites inflicted by dogs or baboons due to them being round and small, but the similarity ends there. These wounds penetrate through the right jawbone, muscle and tissue, and straight into the brain, more specifically directly to the cerebellum, puncturing it and causing instant death to the animal. This reveals a type of euthanasia technique, for this method prevents the attacked animal from suffering.

When the wounds appear on the sides and belly of the victim, the penetration usually cuts through the stomach, down to the liver, apparently removing sections of the organ and absorbing liquid from it. The wall of the wound seems also to have been cauterized apparently to prevent excessive blood loss and no natural inflammatory processes have been observed in the dead animals tissues. Moreover there are no trauma, abrasions, scratches, bites or pressure observed by the examiners on the opposite side of the wound. In most cases the victims lack rigor mortis and remain flexible, days after their death. Incredibly in some incidents, the blood, which remained in the body, would not clot or coagulate for days following death.

A rancher from the South Texas town of Cuero is telling a chupacabra tale, and she says she has the evidence in her freezer.

Phylis Canion says the animal had been lurking around her ranch for years.

She said it first snatched cats, then chickens right through a wire cage.

“[It] opened it, reached in pulled the chicken head out, sucked all the blood out, left the chicken in the cage,” she said.

Canion says two dozen chickens were sucked dry. The meat, she says, was left on the bone.

Neighbours speculate the blue-colored animal that was doing all that damage was a chupacabra. The name is translated from Spanish and means goat-sucker because the creature sucks the blood of livestock.

Canion says not one, but three chupacabras were spotted outside the town in recent days. All of them, she says, were blue-skinned, had no hair and had strange teeth.

“When mange goes untreated it causes this type of reaction. they start to itch, lose all their hair, blue grey coloration. and the animal usually dies from it,” he said.

The Skunk Ape is said to inhabit the Southeastern United States, from places such as Oklahoma, North Carolina, and Arkansas, although reports from the Florida Everglades are particularly common. It is named for its appearance and for the unpleasant odor that is said to accompany it. A handful of sightings have also happened in the Western US, including Simi Valley, CA. In recent months, several sightings have been reported near the Withlacoochee River in Brooks County, GA, between Quitman and Valdosta. The smell of a Skunk Ape has been reported to be similar to rotten eggs or Hydrogen Sulfide.

Bigfoot, also known as Sasquatch, is an alleged ape-like creature said to inhabit remote forests, mainly in the Pacific northwest region of the United States and the Canadian province of British Columbia. In northern Wisconsin, Lakota Indians know the creature by the name Chiye-tanka, a Lakota name for "Big Elder Brother." Bigfoot is sometimes described as a large, hairy bipedal hominoid, and some believe that this animal, or its close relatives, may be found around the world under different regional names, such as the Yeti of Tibet and Nepal, the Yeren of mainland China,or the orenge pendek of indonesia and the Yowie of Australia.

Alkali Lake is located in Nebraska. The Indians of this area told the white settlers of a creature dwelling in the lake. In 1923, J.A. Johnson reported in the Omaha World-Herald that he, along with 2 friends, saw the creature. He also states that he knew of 40 others who had also seen the animal. The 3 saw the creature while camping near the lake. They saw the creature 3/4 out of the water and about 20 yards away. They described the creature as being 40 ft long, dull gray/brown and a horn-like object between it's eyes and nostrils. They said it looked similar to an alligator but was bigger and heavier than an alligator. When the creature noticed the men, it thrashed it's tail about and then dove under the water.

The Bear Lake Monster has a long history dating back the the 1800's, when it was first documented by Native American tribes in the region. The monster has been described as a "water dragon," "aquatic dinosaur," and even a "giant beaver, Descriptions of the creature vary. Its size has been estimated from 40 to 200 feet. Its head is shaped either like a walrus or an alligator. On land it moves awkwardly, but it swims like a serpent at a speed of 60 miles an hour.

See more monsters or urban legends
------
What do you think they are???