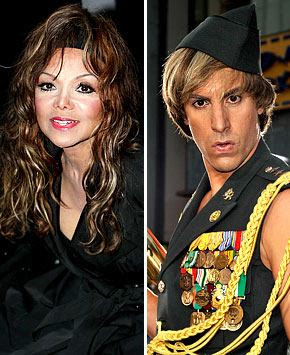 The scene with LaToya Jackson was deleted from the BRUNO movie out of respect for Michael Jackson’s untimely passing.

"Out of respect for the Jackson family, the filmmakers have decided to remove a small scene involving La Toya Jackson," said a Universal spokesperson at the time.

But when the DVD of "Bruno" is released on November 17th, the scene will be included as an extra.

Now that 4 months have passes since the death of M.J the scene has now been added as a bonus feature on the DVD which is to be released Nov 17.

But you can check out the scene right here, right now. That is so wrong! LOL .. and I believe that Paula Abdul who they tried to prank at the start but didn't want anything to do with it.. I can't believe Latoya went through with it for as long as she did! ;)