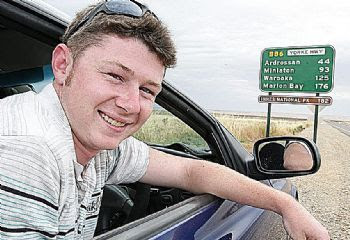 AN Adelaide man has been convicted of criminal defamation after posting material about a country police officer on social networking site Facebook.

Defamation experts believe the case, involving Christopher James Cross, 19, has set a legal precedent and should serve as a "wake-up call" for all Facebook users - which number more than six million in Australia.

Cross, of Salisbury, pleaded guilty last Monday in the Kadina Magistrates Court to criminal defamation - and became only the second person in SA ever convicted of the rarely used charge.

When the apprentice diesel mechanic was charged on August 27, his police bail conditions included a ban on him returning to his home town of Yorketown, on Yorke Peninsula.

The ban lapsed following his guilty plea on Monday and Cross returned home for the first time on Friday.

A sheepish Cross on Friday said he "didn't realise you could get in trouble for things on the internet".

"Other stupid stuff has been said towards other people and towards me, and nothing has ever happened. The fact it involved a police officer, that's where something happens," he said.

Kadina CIB detectives launched an investigation after one of Yorketown's two police officers, Senior Constable Mark Stuart, was alerted to material posted about him on a Facebook group, called "Piss off Mark Stuart".

When questioned by detectives, Cross admitted setting up the Facebook group targeting the officer.

On Monday, he appeared before Kadina Magistrate Derek Sprod and pleaded guilty.

He was convicted and placed on a two-year, $500 good behaviour bond. If Cross breaches the bond, he could face a jail term of up to three years.

The Facebook page created by Cross contained photographs of Sen Constable Stuart, the location of his house, and had many posts from visitors who had left incorrect, offensive and grossly defamatory statements about the officer.

Some encouraged acts of violence and aggression towards him.

The court heard Cross made full admissions to Kadina detectives when he was arrested. He admitted setting up the Facebook page because friends had complained to him about Sen Constable Stuart and that his actions were "stupid".

SA Police's Commercial and Electronic Crime Branch worked with detectives and had the Facebook page removed. It was active for about four to five days and had 43 entries when taken down.

Cross said when he established the page, he had "no idea" his actions were illegal and the comments on the page about Sen Constable Stuart were made "as a joke".

But he admitted that his mother, Catherine Goodwin, who lives in Yorketown, had told him he may "get in trouble".

"It wasn't until three or four days afterwards mum sort of said 'this is a defamation sort of thing and if he (Stuart) was to see this, you could get in trouble for it'," he said. When he told his mother he had been charged with criminal defamation she "pretty much said, 'I told you so'."

Asked if he would contemplate such action again, he said "no, of course not, no", but said he had no plans to apologise to the police officer.

Sen Constable Stuart, an officer for more than 18 years - the last five in Yorketown - yesterday said the episode had caused his family "considerable distress".

Sen Constable Stuart, who is not a Facebook user, said he was "astounded at the savage nature of many of the interactions". He said he was alerted to the page containing the offending material about him by colleagues who were contacted by community members. "I was angry," he said. "As a local police officer, I believe it is part of the territory that we have to take a little bit more than the average person.

"However, on this occasion it was quite a personal attack and it (the page) even had photographs of my children."

Sen Constable Stuart said he was "active" in policing road safety issues locally, which may have led to animosity from some locals - including some of Cross's associates.

"I have charged some with drink driving and have defected their cars and they don't like it," he said. "My answer to them (his critics) is if you are not happy about what I do, complain about it and have my activities scrutinised, and they will be.

"Or don't do the wrong thing in the first place. Have your car roadworthy, don't drink and drive, and don't behave like a moron at 2.30 in the morning when the pubs shut."

Sen Constable Stuart said while he accepted the personal attacks that often came with being a country officer, when combined with the 24-hour nature of the job, it meant his wife and two young sons also suffered.

"I accept all of those things, but this was one step too far," he said.