Lindsay Lohan Was Dating Ledger When He Died 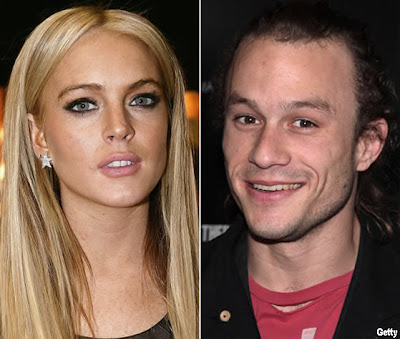 Well! If you believe the tabloids & Lindsay's mother they would now have us to believe that Lindsay Lohan dated Heath Ledger before his untimely death. If this is the case them he would have been dating him the same time that Gemma Ward and Mary-Kate Olsen were.. here is the article from Starpulse Entertainment NEWS.... >

Lindsay Lohan Was Dating Ledger When He Died


Lindsay Lohan was dating Heath Ledger when he died, according to the actress' mother. In the latest leaked phone conversation between Dina and her ex-husband Michael, the Lohan matriarch claimed back in 2008 that Lindsay was "f**ked up" by the actor's fatal drug overdose in January of that year.

She says, "She was dating Heath when he died. I don't know if you know that, but I know 'cause I would drop her off and they were friends, very, very close... That f**ed her up."

In the tape, which appears on RadarOnline.com, Dina also describes her fears Lohan will suffer the same fate as Ledger, adding, "When she's drunk or takes an Adderall (prescribed stimulant) with it she will do something like Heath Ledger did in a second without thinking. She cannot be alone. When she sleeps here she sleeps with me... she has fears from being little..."

Michael Lohan is leaking taped conversations with Dina, Lindsay and her ex-employee Jenni Munro in a bid to convince the Mean Girls star to seek help for an alleged drug addiction.

The move has angered Lindsay, who has blasted her dad in the press, and Munro - who has threatened legal action.

OTHER RELATED NEWS:
US Magazine.com -Report: Lindsay Lohan and Heath Ledger Secretly Dating When He Died