'Less than 20 years' left to save Orangutans 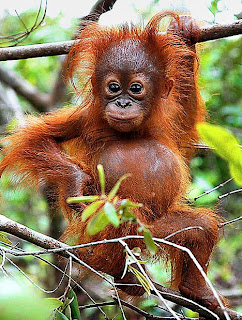 I visited Sepilok Orangutan Sanctuary when I was 14 and lived in Malaysia with my family for 4 months. It's sad to think that these beautiful animals could be extinct one day. I would love to work with primates after completing my studies, I think it would be amazing to help with their breeding program.. one day, one day ..

The sad story is that Palm Oil Deforestation is the biggest killer of the Orangutan.
Say No To Palm Oil and join the campaign to have palm oil listed in all ingredients on our food products.

Video: Don't Palm Us Off

We share 97% of our DNA with Orang-utans. You could say they are our wild cousins.

Palm Oil typically costs the lives of up to 50 Orang-utans each week.

Over 85% of the worlds palm oil comes from Malaysia and Indonesia.

In SE Asia alone, the equivalent of 300 football fields are deforested every hour for palm oil production

The food you are buying could be pushing Orangutans to extinction. Palm oil is found in about 40 percent of the food products on our shelves and its rampant cultivation is destroying the Orangutans habitat at an alarming rate.

The following article shared from NEWS.com.au

THE world has less than 20 years left to save the orangutan, according to conservationists who predict the charismatic red ape will become extinct if no action is taken to protect its jungle habitat.
There are thought to be 50,000-60,000 orangutans still living in the wild in Malaysia and Indonesia, but deforestation and the expansion of palm oil plantations have taken a heavy toll.
"The orangutans' habitat is fragmented and isolated by plantations, they can't migrate, they can't find mates to produce babies,'' Tsubouchi Toshinori from the Borneo Conservation Trust said.
Environmentalists are calling for the creation of wildlife "corridors'' in Malaysia to link the scraps of jungle where orangutans have become trapped by decades of encroachment by loggers and oil palm firms.
Mr Tsubouchi said that although studies have predicted orangutans will disappear within 50 years if their habitat continues to vanish, action needs to be taken within the next two decades to stall that process.
"We have to establish the corridors in 10 or 20 years, otherwise we won't be able to do anything later,'' he said.
Some 80 per cent of the world's orangutans live in Borneo, which is split between Malaysia and Indonesia, and the rest are found in Indonesia's Sumatra province.
"What we have left today is maybe only 10 per cent of what we used to have before,'' Marc Ancrenaz from the environmental group Hutan said.
Hutan focuses on conserving the 11,000 orangutans in Malaysia's Sabah state in Borneo.
An aerial survey carried out by Hutan and wildlife authorities in Sabah last year revealed some 1000 orangutan treetop "nests'' located in 100 small patches of forest completely surrounded by palm oil plantations.

Mr Ancrenaz said that if immediate action was taken, there is still a good chance of ensuring the long-term survival of the primate as there is still enough genetic diversity for it to thrive.
"Unlike the rhinoceros whose numbers are so few, we still have a decent size population for the orangutan,'' he said.
"If they are going to become extinct, it will not be in the next 10 years."
Experts say that wildlife corridors would enable orangutans to move across the fragmented landscape and alongside rivers to seek food and mates.
The corridors could be used by other endangered species such as the pygmy elephant and rhinoceros, but progress on the initiative has been slow.
The Malaysian palm oil industry, often criticised for its poor environmental performance, pledged to fund the corridors at an October conference but nothing has yet been done.
Malaysian Palm Oil Council chief executive Yusof Basiron said he was waiting for environmentalists to advise how much land would be needed, and denied that lack of action was threatening the species' future.
"Last time they said the orangutans will go extinct in 2012, now they say in 15 or 20 years - why keep on shifting the goal posts?'' he said.

Don't Palm Us Off

How to Identify Unlabelled Palm Oil 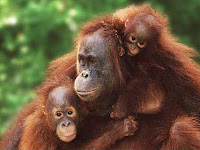