Is the end of the world approaching?

Earthquakes, tsunamis, floods , mudslides, deadly storms, avalanches and other natural disasters! Is the end of the world approaching? Mother Natures Fury is hitting harder and with more deadlier force and we are hearing more and more of these incidents of late.
I watched this on the tv on the morning show today-
VIDEO: With natural distasters on the increase, experts speculate whether this is the beginning of the end of the world: 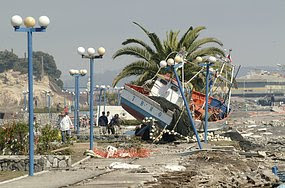 Damage caused by the Chile Earthquake and Tsunami which washed this boat right out of the water.
Most recent events have occured with the Haiti Earthquake in January this year. Now only 7 weeks later the Chile Earthquake hit on the weekend which struck a whopping 8.8 on the richter scale and triggered the biggest tsunami warning in history. A tsunami was recorded, with amplitude of up to 2.6 m (8 ft 6 in) high, in the sea at Valparaíso, Chile. Chile also had an earthquake back in 1960 which was the strongest ever recorded in the world at 9.5 magnitude.
Other natural disasters that have already occurred this year in 2010 are : 2 earthquakes in the USA the Madeira Floods and Mudslides, the Kohistan Avalanche and the first North American Blizzard.
And we are only into the 3rd month of 2010! Scary! 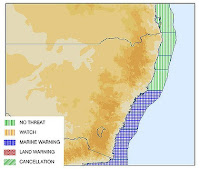 This map for tsunami warning changed many times, the last warning before 8am on Sunday had the whole east coast of Australia as a blue 'Marine Warning'.
The tsunami warning for the east coast of Australia after the Chile Earthquake totally freaked me out (as my facebook friends would of noticed) Mind you, living right on the beach will do that to you !
AUSTRALIAN TSUNAMI WARNING CENTRE: Bureau of Meteorology
I checked the Bureau of Meteorology website after each update on Saturday night! I had the worst sleep that night before the Sunday morning when it was supposed to hit . Even though it was only a marine warning,  I had a dream all night about a tsunami similar to what hit Indonesia. I was then woken by the lifeguards 'horn' and the lifeguards were 'freaking out' over the loud speaker " Could the boys on their body boards please come out of the water as there is a tsunami warning and your parents are worried"... I don't think anyone in the water listened!
The waves I watched from my front window were flatter than most days here.. Turned out that it did barely nothing to the east coast of Australia.. Japan had some flooding and sea rise to1.2 m and 320,000 people were evacuated, no lives were lost thankfully.
"The first wave was just 30 centimetres but then the sea began to rise. First by half a metre, then a metre peaking in Honshu at nearly one and a half metres - enough to flood some port towns and in parts, the surging sea refused to retreat. It took more than an hour for the ocean to return to its normal level." read more regarding Japan 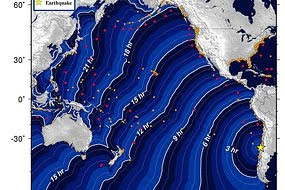 The earthquake in Chile sent tsunami waves roaring across the Pacific Ocean.
Among the biggest in Australia was at Norfolk Island, which recorded a 50cm surge. The Gold Coast saw a 20cm increase in sea levels. In Tasmania, Southport and Darlington experienced a 17cm increase. Port Kembla, south of Sydney, recorded a 14cm increase.
I think we only got about 5cm sea rise increase here where i live , well that's what someone told me and I'm happy thinking that ;) lol. 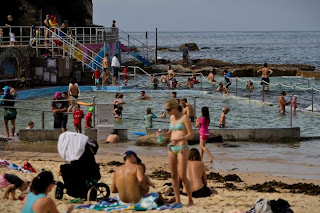 Bondi Beach : Ignoring the Tsunami warnings yesterday (Sunday 28 Feb 2010)
Aussies ignore warnings as tsunami scrapes coast.
Related Article Shared :From : E Travel Blackboard
A Pacific Ocean tsunami hardly tickled the east coast of Australia yesterday despite its trigger being a devastating 8.8 magnitude earthquake off the coast of Chile.
The Joint Australian Tsunami Warning Centre issued a tsunami alert on Sunday for the east coast of the country after Saturday’s earthquake, prompting the evacuation of beaches and surf lifesaving activities.
However, beachgoers ignored the warnings, with many surfers riding waves in the Gold Coast and hundreds of people lining the promenade at Bondi Beach in Sydney to get a glimpse of the tsunami.
27-year-old Gabby Stevenot told the Australian she had travelled more than 20km from West Ryde to watch the tsunami.
"That's why I came down here -- I wanted to see the big waves and the big show but there's not really much happening at all” she said.
Luckily, the tsunami ended up travelling north-west, narrowly missing Australia's east coast.
But there were still tsunami waves recorded along the NSW, Queensland and Tasmanian coasts, with the Gold Coast seeing a 20cm increase in sea levels, the Canberra Times reported.
Tasmania, Southport and Darlington experienced a 17cm increase while Port Kembla on NSW's South Coast recorded a 14cm increase. Norfolk Island recorded a 50cm surge in sea levels.
When the risk of the tsunami had passed, the alert was withdrawn and beaches reopened at 5pm.
NSW Premier Kristina Keneally warned that people should have obeyed the warnings.
"Next time, they may not be so lucky” she said.
----------------
Global Warming?
Are all these disasters occurring as a result of global warming due to us not caring for our planet?
After the weekends natural disaster some enviros are claiming is that global warming  is raising sea levels and reducing or eliminating the natural barriers (mangroves, coral reefs, etc.) that protect coastlines from the worst of the tsunami damage. As a result, the damage was worse than it needed to be, and will be worse yet in the next catastrophe.
Al Gore Made a movie called ' An Inconvenient Truth' - A documentary on Al Gore's campaign to make the issue of global warming a recognized problem worldwide.  (more info on climate crisis)
----------------
Is the world really ending in 2012?
I have not yet watched the movie 2012.. and not sure that I want to, freaks me out just like the tsunami warning did ! In the movie a global cataclysm brings an end to the world and tells of the heroic struggle of the survivors. Here is the trailer :

The Maya Calendar:
The Long Count Calendar of the Ancient Mayans ends on Dec 21, 2012. There isn't much information regarding what the Mayans thought would occur in 2012, but the consensus of opinion is that there will be great change. To some people this means a positive, spiritual change, others believe a catastrophic event and the world ending may have been predicted.
RELATED: Survive 2012 - A blog by Robert Bast
I had alot of things I wanted to achieve in my lifetime and ending at 2012 really does not leave me enough time to do them all!
What are your thoughts? Please comment..
----------------
RELATED:
-  2012 news service - unbiased and purely 2012
- 2012 wiki - every fact regarding the Mayan doomsday can be found there
- 2012 database (over 400 sites listed)
- popular forum
- 2012 social network
- 2012 blog
Posted by Unknown at 2:19 PM