A few major 'photoshop fails' have popped up recently in the media. Some are funny, other's just embarrassing for the publisher, designer and model. Most recent in the news has been the 'Kate Moss's daughter vogue airbrushing blunder'.

I thought I would share some other examples of where photoshop and airbrushing photos has turned out terribly wrong! :) I really do feel fashion magazine's do go way overboard alot of the time. Most of which is unecessary as you will see below. Click on the images to view larger versions. 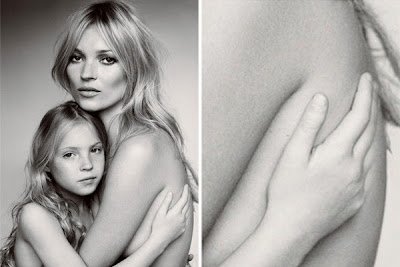 Here It seems an overly enthusiastic designer has photoshopped Kate Moss' daughter Lila grace’s hand, leaving her with only two fingers and a thumb! You can read more about this disaster here. 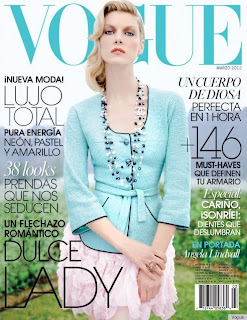 In this example Vogue seem to have made model Angela Linvdall have a very elongated neck! 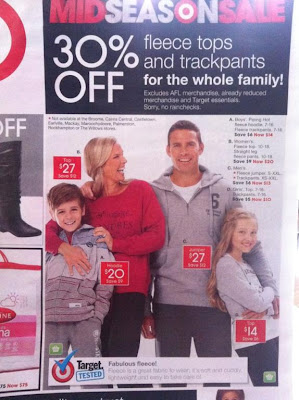 Can you spot it? Seems this guy can't keep all his hands to himself ! I wonder if Target makes their winter woolies in a 3 armed version too? By the look on that woman's face makes you wonder if there is another arm that's gone missing?.. ok i'll stop now ;) read more 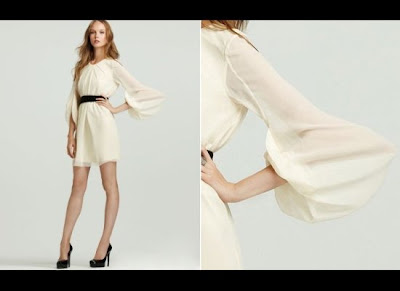 Bloomingdales turned a perfectly innocent model into a mutant. Photo finishers have given her a very pointy, freaky looking elbow.  read more 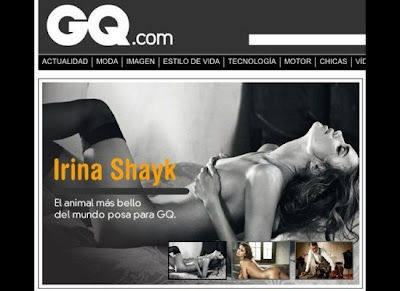 Model Irina Shayk claims GQ Spain Photoshopped the underwear right off  and that she never posed nude at all. She's taking the Spanish magazine to court over the pics. read more

BIT TOO MUCH FOR BIEBER: 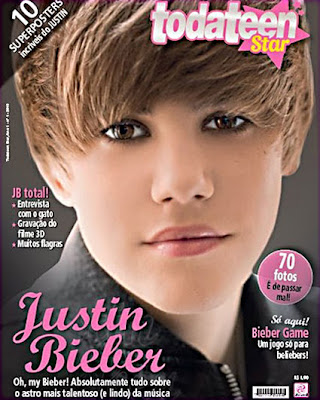 All I can say is...... Wow! Do I need say more? Looks like the Proactiv Solution is doing more for Bieber in this pic than he bargained for. ;)

ANN TAYLOR'S AT IT AGAIN: 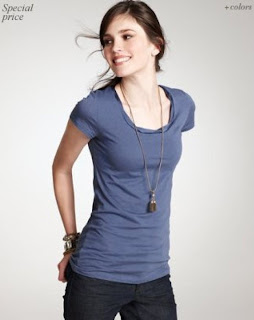 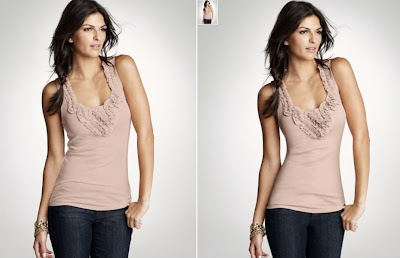 Seems that the designers at Ann Taylor online are becoming quite the serial photoshop blunderers.. If there is even such a word ;) A missing arm and a freakishly tiny waist! Ugh! read more 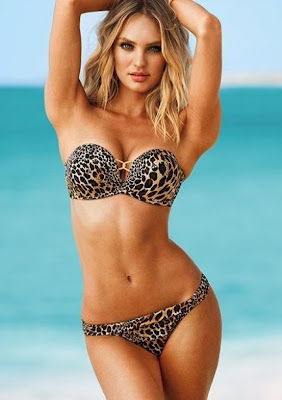 Victoria's Secret are also renowned for their airbrushing techniques like shown here! Model Candice Swanepoel's shoulder joint appears to be disconnected from the rest of her body. I've seen some serious swimmers shoulders but this just looks wrong! Eww.. 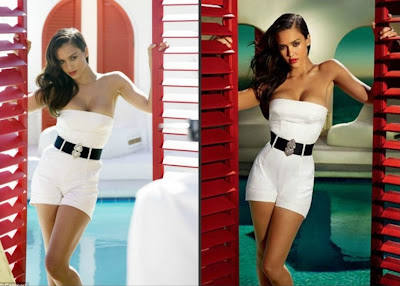 This Campari campaign morphed Jessica Alba into a much thinner version of herself. While she looks great in both images, if the originals hadn't been leaked no one may have known.


LOSE CURVES .. AND MAYBE SOME COLOUR? 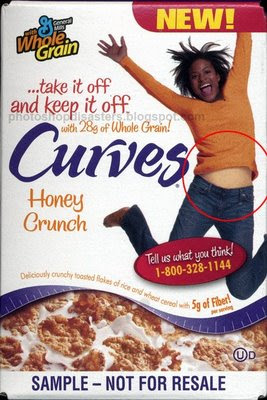 Ummmm did someone photoshop the wrong stomache on this lady or do you think she is she wearing an undershirt?

HONEY I SHRUNK YOUR SISTER: 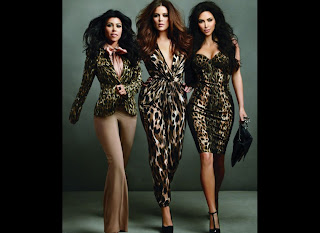 Khloe Kardashian is noticeably taller than both Kim and Kourtney. Khloe, who at 5'10 normally towers over her pint-sized sisters. Here she is apparently shrunk down to "fit" the frame for this Sears campaign shot by Annie Leibovitz. 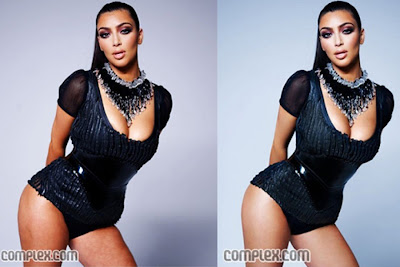 Even though Kim admits to love being curvy and appears to show no shame, this image that Complex.com accidentally posted on their site would have people thinking otherwise. The right image shows her somewhat slimmed and smoothed appearance. 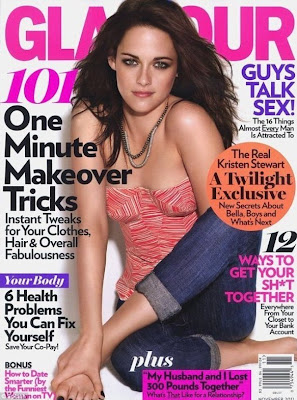 A case of the disappearing arm! Where on earth is Kristen Stewart hiding that thing? 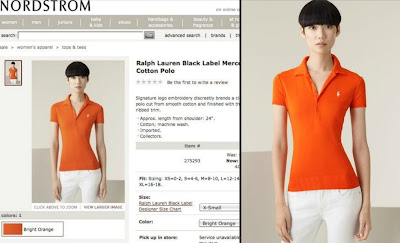 Nordstrom messed up with the unrealistic waist on their online store image selling a Ralph Lauren Polo shirt. 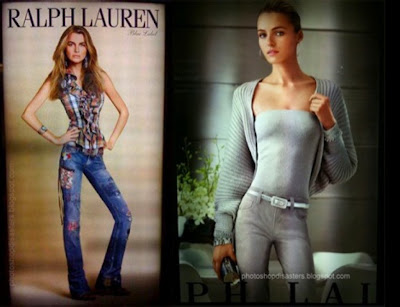 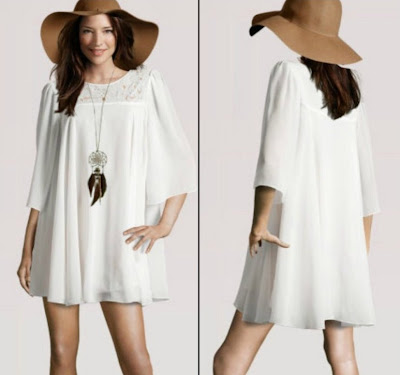 Looks like instead of receiving a face lift this model has gone for a complete 'face lift off'. This is a catalogue ad from H&M. 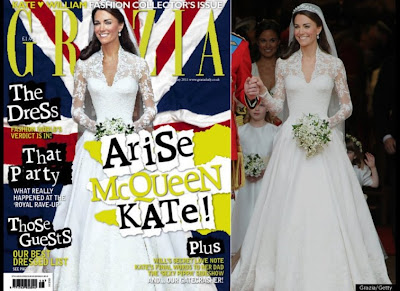 Some were shocked at Kate Middleton's frail frame in her Alexander McQueen gown on her wedding day. But a Grazia magazine retoucher decided to take it up a notch by airbrushing her already tiny waist, to look just like a life-size Barbie's instead. It seems that Grazia has tried to trick us into thinking the Duchess has the worlds smallest waist. read more


LOOK MY HEAD'S ON WRONG: 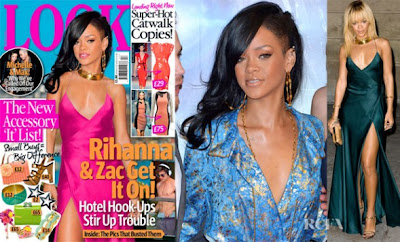 Notice anything weird about this Rihanna cover of Look magazine? Looks like someone had a head swap. Wonder what was wrong with her head in the pink dress to make the magazine do that! 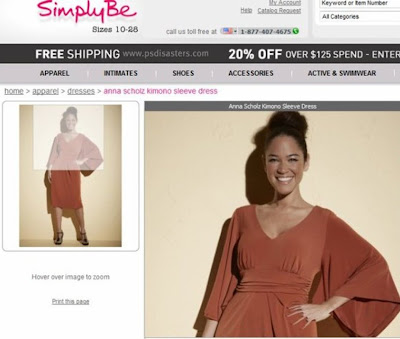 SimpleBe, a UK brand known for catering to plus sizes, has photoshopped this models hand into, what appears to be, a nasty looking claw. 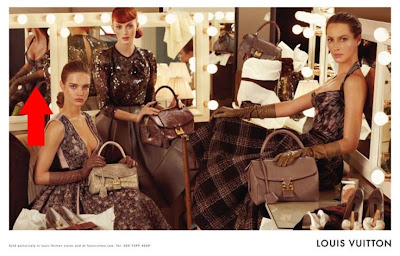 If you have eagle eyes then you may notice that the reflection doesn't match the scene in this Louis Vuitton handbag advertisement. 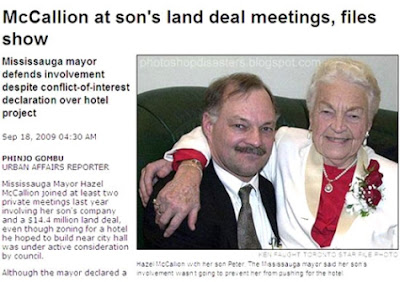 Even the newspapers get it wrong. Another case of the miraculous ability to instantly grow limbs through the use of photoshop. 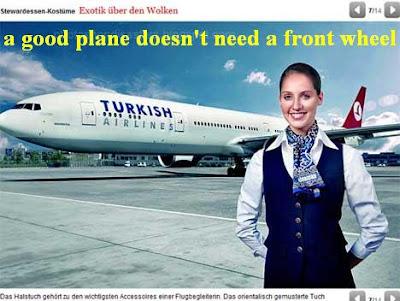 Just as the added caption says. Well apparently according to this Turkish Airlines advertisement. 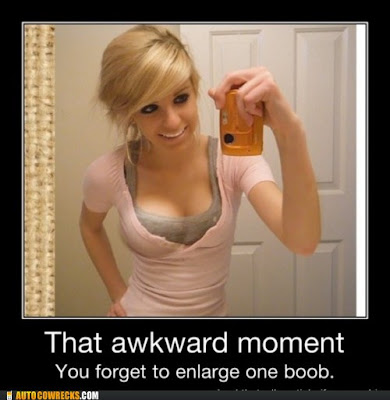