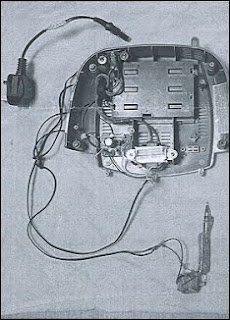 AN inmate at a British detention centre was caught offering tattoos - using a machine he rigged up from a Sony Playstation.
The Sun said the detainee stripped down a console and attached its motor to a ballpoint pen with its tip sharpened to drive ink into the skin.
His homemade gizmo was seized along with a tattoo magazine from his room at Brook House Immigration Removal Centre near Gatwick, West Sussex.
Sources claim he charged other detainees to use it - but officials denied this.
A source said: "It was a truly bizarre piece of DIY, up there with some of the most extraordinary finds staff have made.
"When it was switched on it would move up and down like a real tattoo gun. But you would have to be daring to want a tattoo from a machine like that."
The Border and Immigration Agency said the device was seized during a routine check of rooms.
A spokesman said: "No further action was taken, but staff have been made aware so they can be vigilant for anything similar."
The centre holds 426 men - many awaiting deportation after jail for crimes in the UK.
They are allowed PlayStation 1 and 2 consoles, but not the PlayStation 3 model because it can connect to the internet.
Guards in US jails have found tattoo guns made from Nintendo consoles.
Read more at The Sun
Posted by Unknown at 11:18 PM