Boy donates pet turtle to zoo, watches it be eaten alive by alligator 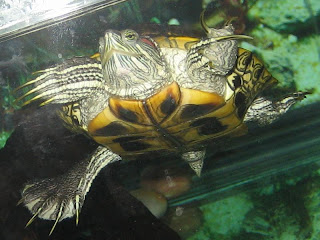 Article Shared from : NEWS.com.au
A FLORIDA boy remained distraught after watching an alligator feast on his pet turtle when he donated it to a local aquarium park, the Pensacola News Journal reported overnight.
Crunches from the turtle’s shell were heard by Brenda Guthrie and her eight-year-old son Colton as the alligator devoured the family’s pet last Thursday.
A distraught Colton begged the alligator to release the turtle, called Tomalina, with no success.
"He was shouting, ‘Oh no alligator, let it go,’” Ms Guthrie told the paper.
The family donated the pet to the Gulfarium in Fort Walton Beach, Florida, when the turtle grew too large for her home aquarium, the report said.
They reportedly chose the Gulfarium so that Colton could come back to visit Tomalina whenever he wanted.
Officials at the water park said it was uncommon for the gators there to be interested in turtles.
Read more about the tragic death of Colton's pet turtle at the Pensacola News Journal