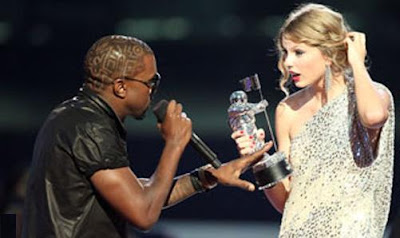 Kanye & Taylor at the MTV VMA's

In case anyone was wondering if Taylor Swift is going to go there when she hosts "Saturday Night Live" this week, the answer is yes. The superstar isn't afraid to poke some fun at Kanye West's now-infamous VMA stage-crash.

In a promo shot Tuesday, the singer and "SNL" castmember Bill Hader put their spin on the encounter.

Standing in a 30 Rock corridor, the promo opens with Hader on his cell phone while Swift says, "Hey, I'm Taylor Swift, and I'll be the host and musical guest this week on 'SNL.' " As she completes her line, Hader gets off the phone and tells the star who he was talking to. "Whoops, Kanye West just called. He thinks Beyoncé should host instead," he said. "Funny joke, right?"

Swift rolls her eyes and whispers to herself, "Wow." Hader then awkwardly says, "Good times," before walking off the set whispering to himself, "Hader." The two share a laugh after they complete the sketch.

In an interview with MTV News before she went off to shoot the promo, she said nothing was off-limits this weekend. "I want to look nothing like myself," she said. "I told all the writers, 'Don't count anything out.' I want to go completely, 100 percent in. I don't want to be halfway involved. Just because I have a lot of things to do as far as being musical guest and host doesn't mean I don't want to live up to my full hosting demands."