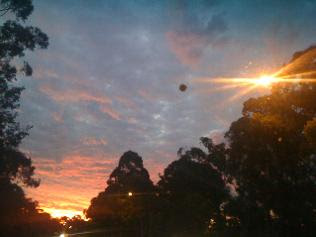 I was listening to the radio in the car this moring to the Kyle and Jackie Show and they were talking  to people that had seen these unexplained orange lights and objects in the sky on Sunday Evening.
Fiona Hartigan spoke how she was taking photos of the beautiful sunset on the side of the road  above Governor Macquarie Drive at Chipping Norton on Sunday evening. She spoke of how an orange light appeared with a round object and then smaller round objects quickly darted out of it and within 5 snap shots on her iphone they were gone.
"As I was about to take the picture this black object appeared and then it started to move," she said.
"It started off about 800m away but it came closer - to about 400m - and then two other little round things appeared from this bright orange light above.
Other people confirmed seeing the same things but it happened very quickly.
She is not sure if they are UFO or aliens as such but after the photos were sent to Meteorologists and tested by their special equipment they definately can not be explained, even by the experts.
See photo at end of article.
--------- 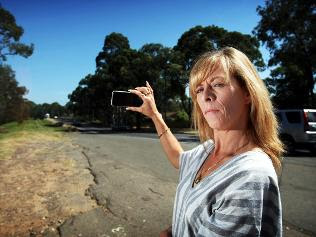 Fiona Hartigan with her iphone that she took the photos on.
Article Shared: The Daily Telegraph

UFOs over Sydney - the intergalactic neighbours drop by

THEY emerged from a blazing light in the clouds, descending on a busy Sydney street before zipping off silently into the sunset.
Just what - or who - propelled the strange flying discs across the sky may never be known.
But while the close encounter was over in seconds, it was enough to convince mother-of-two Fiona Hartigan that she'd just seen a UFO.
And she has the photos to prove it.
Read more about UFO sightings in Sydney in our Space and Science section
Ms Hartigan yesterday said she had just got out of her car on Sunday evening to snap a few sunset photos when the amazing events began.
"As I was about to take the picture this black object appeared and then it started to move," she said.
"It started off about 800m away but it came closer - to about 400m - and then two other little round things appeared from this bright orange light above.
"There was no noise. It was calm and peaceful but it was very weird."
Ms Hartigan said the main UFO then "shot off" above Governor Macquarie Drive at Chipping Norton, with the smaller UFOs zipping away in the opposite direction.
"I don't know how to explain it - I'm still totally bewildered," she said.
To the sceptic, Ms Hartigan's photo might show a speck of dust on the lens or something small floating in the air close to the camera.
But close encounters like Ms Hartigan's came as no surprise to UFO Research NSW spokesman Doug Moffett: "It could be some electrical anomaly that no one has ever seen, it could be an extra-terrestrial craft, it could be something else.
"There does appear to be a blur around the image, which could just be the way it's shaped, or - and this is pure speculation - it could be due to its propulsion system.
"Whatever the case, it's an opportunity to learn something new."
Mr Moffett said there were between 1000 and 1500 UFO sightings in Australia every year, "but that is just the tip of the iceberg".
"Why would anyone make these stories up? They are setting themselves up for ridicule," he said. 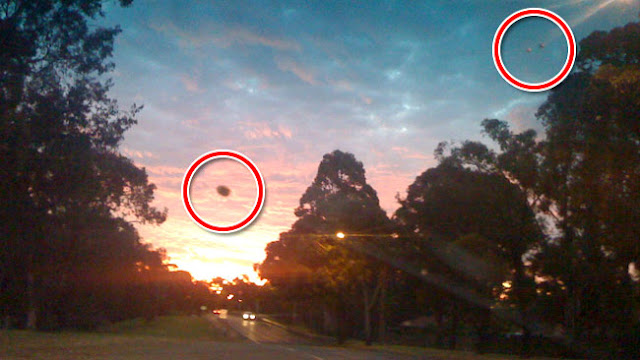 the mysterious photo of what might be a UFO (circled) taken by Fiona Hartigan at sunset
---------------
More: UFO Buzzes Sydney - and here's the 'proof'
Here is a video on a similar UFO sighting in 2006 in Melbourne:
Related Links: UFO and other weird sighting on the Central Coast NSW
UFO Sighting Maps - Google word map pin pointing UFO Sightings

Do you believe in UFOs?
UFO Sightings - Are we getting closer to first contact?
Posted by Unknown at 10:00 AM